As the D-Day for the Presidential Election draws near, and the contenders wind down their campaign and the electorates gather in their different locations to cast their votes, let us remember…it’s up to us to vote, in good conscience and with a sense that the future of our nation is at stake, with this election.

Let us, with circumspect, review the 72 contenders for the highest office in the land, and in all good faith eliminate out of the list, those we know cannot make it to that office. I have seen several posts, videos, and comments about doing a protest vote against the incumbent and his main challenger, but let us be logical and apply a measure of intelligence to the conversation, with the foresight of a prophet. Of the 72 candidates as released by INEC to contend, only two are really the main contenders and the remaining 70, can they really rock the boat? Let’s say maybe 1 or 2 may make a feeble attempt to attempt to rock the boat, but really it would just be a scratch on the surface…in the real sense of it.

I know we are not yet where we want to be, and a whole lot seems to be in disarray. We have heard promises and we have been failed on promises. But in my estimation, this is our real face. The real face of Nigerians. And the facts do speak for themselves, and depending on which side of the divide we are, we would sling both verified and unverified facts into the array. But i also tend to believe in numbers and the prophetic. Quite a queer combination you say? Well yes it is, the numbers i look at tells me things are taking an upward swing, albeit slow. National indices and economic reports all attest to the fact that the Nigerian economy is recovering, and rising out of the trough/depression. Yes the outlook does not say it, but it’s a process and system that needs be built to make it more lasting and not short-leaved. Our reality would indeed be, our reality. But do we want to exist in the present and not live for the future?

Every other candidate challenging the incumbent are offering promises and what it would take to turn the economy around, but I have long learned, all that glitters is not gold and until you are in the kitchen, you can never know how hot it is or how hot it could be. The truth is, the Nigerian situation requires a practical hands-on solution and handling, not theory. This has effectively narrowed down the contenders into a few. (The truth is, the majority of those contesting, can damn well contest for either councillorship or State Assembly than gunning for the top job. Yes few can take a stab at the National Assembly as well and their impact would be more profound!). And of the candidates who can proffer a hands-on solution, we must now look at which of them, has the blueprint for Nigeria we desire for our children and which we can be proud of. Yes, we can say how is that possible, but you need to key into the realm of the prophetic to discern the times and seasons like the sons of Issachar. Which of them could be a vessel that would usher in the process and system of change that we earnestly desire and clamor for.

Protest vote even if its a loss… I think it’s foolhardy. Let’s tell ourselves the home truth, we need to be set aside sentiments and religious bigotry and like a laser, focus on what is about to happen in our nation and the role we would play. A protest vote even if lost, is just a mere scratch that will get wiped off with oil and no one would notice. Why not let’s vote for a collective future…that we can have reliable, trustworthy and intelligent people contest for elections….men who can stand before a demagogue and damn its treacherous flatteries, without winking. Tall men, sun crown, who live above the fog, in public duty and in private thinking.

We have a responsibility tomorrow as we go out to vote. Yes, it’s going to be fraught with challenges… I would have to go to my former place to vote and the same would be with most people. We have a decision to make between a rock and a hard place, between the devil and the deep sea. Forget the other distractions all around, you don’t have to be a clairvoyant to know this election would determine the future of our nation, so it would make absolute sense to vote right and not in protest to secure the future of our nation. Moreover, if we know what God has in store with this election, we would vote aright and be sensible enough to align with it. But hey! It’s your choice! It’s your vote! It’s your conscience! 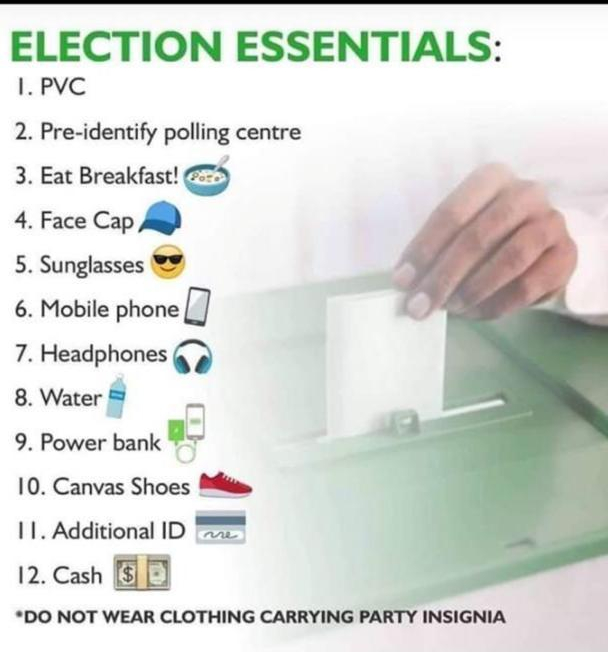 This episode is also available as a blog post: https://samaderibigbe.com/2022/11/25/baby-steps-in-starting-your-business/